Disclosure: Some of the links below may be affiliate links which means that if you click through and make a purchase, I will earn a financial commission. This will not involve any additional cost to you.

In February 2005, my company Orion Telescopes & Binoculars, was acquired by a company called Imaginova (Orion is now an employee-owned company) with the belief that visitors to Imaginova’s content sites (at the time, Space.com and LiveScience.com) would be persuaded to respond to advertisements for Orion products placed on those content sites. Subsequently, this belief was also at least partially the impetus for the launch of an ecommerce site at LiveScienceStore.com. Imaginova subsequently launched two additional major content sites at Aviation.com and Newsarama.com.

A core element of Imaginova’s vision and strategy was the matching of content with commerce (i.e., persuading consumers of content to buy products).

The strategy had not been effectively implemented as the amount of commerce revenue that could be attributed to visitors from Imaginova content sites, newsletters, and widgets had been below expectations.

In response, the CEO of Imaginova asked me to develop a proposal for ways in which we could increase traffic to and profit from the three Imaginova multi-channel commerce websites (Telescope.com, LiveScienceStore.com, and StarryNightStore.com) through optimization of advertising placements on Imaginova’s then consumer media channels (Space.com, LiveScience.com, Aviation.com, etc.).

The result was this report which was accepted by the CEO with only one request for a minor change: 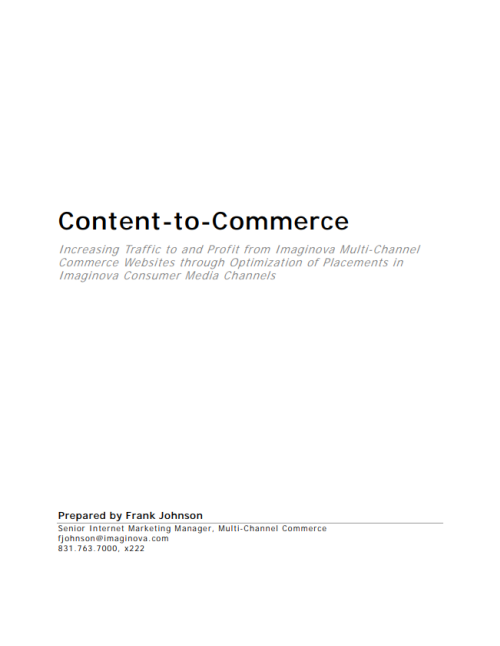 If you are as passionate about ecommerce and digital marketing as I am, I would be very happy to hear from you!